Profitable Humanity vs the Problematic

Profitable Humanity vs the Problematic

Whether a person is a Muslim or a Mormon means little when dealing with humanity and trying to maintain a sense of humanity. A huge chunk of humanity has voted no to their old countries as did millions did a century ago and more to their "old countries" to come to the US and Argentina.
What they wanted then and now is a way to feed and protect their families and a way to reach their human potential unfettered by the chains of the past.

The Task
What to do with this mass migration not only involves the potential host countries but with the active participation of the refugee population through their designated representatives. This is more than just a political issue, it is more economic and what the refugees offer as skills, knowledge and attitudes are the assets a smart polity will address. We must create a mechanism where the Syrians and others from troubled lands nearby where problems and desired solutions can be aired.

We have roughly two months to complete this process, one month ago it should have started.

The order of magnitude is millions, Dealing with tens of thousands or even a couple 100,000 is yesterday's old news. One cannot bottle a couple of million entrepreneurs without trouble afoot.

There is no tradeoff between security and humanitarianism as to deny the one defeats the other. There are no security measures on the table that can deal with stuffing a couple of million from the cradle of civilization into jars, tents and hovels that won't fail utterly. Those millions presently penned in UN Concentration Camps will join the present exodus.

There is no viable force short of biological and nuclear warfare that can effectively stop migration, and that has a serious capability to blow up. Now is the time to get serious about maintaining the momentum of the movement to leverage advantage, While Europe is already packed with people, there are many other parts of the world where a few million could be moved, but moved in a manner in which the refugees are part of the decision making process,.

The motives on combatants and all others affected by a conflict is at the core, biological survival of self and of the primary group, day to day, and generation to generations (Food and Family). Enabling these are Psychological Roles to protect and nurture, done in accordance with Sociological Rules of social status and the land, aided by Technological Tools.
Singing and dancing, marksmanship and bulldozers are Tools.

The Syrian exodus of entire families including the kids is about as clear a statement that staying in Syria is a clear and present danger to biological survival. If those who left saw a viable alternative to go back, it will take a generation to act on it.

Those who stay behind have made a choice that cooperation can be done sufficient to continue biological survival. Given the continued butchery by ISIS of even those who volunteer from foreign lands, the bloom is getting tarnished. North Korea is an example where the people have accepted utter nonsense as reality as they see no alternative. ISIS does a better job on its turf than North Korea.

The choice of Syrians is between an oppressive regime, scatterbrained rebels, a murderous ISIS, and a tepid West. If Assad's regime falls, there is little guarantee that the gaggle of rebels will do any better than those of Libya.

If the Syrian exodus were effectively settled anywhere, they would remain a not so latent threat to those who have murdered Syria. The Cuban enclave in Miami in spades would happen.

Thinking has little to do with decision making for the continued survival of the primary group, biological or not.

BIOLOGICAL; Food and Family
PSYCHOLOGICAL: Roles that protect and nurture the family
SOCIOLOGICAL: Rules that the Roles adhere to
TECHNOLOGICAL: The necessary Tools

Or the shorter version

The History, Closing the Ports of the Levant to Shipping by 13th Century

Part of the reason that the Ports of the Levant were shut down was to induce trade with India and the Far East to go through Cairo and then through the Red Sea. Once the Ottomans achieved a naval capability of note, they preferred trade to do through Ottoman Territory which until Iraq was taken, meant the northern over land route (Silk Road).

When the Ottoman Empire was defeated in WW 1, the British and French sought to reopen the middle route, by way of Aleppo-Damascus to Baghdad to Basra and the Persian Gulf. The flow of commerce restored, also restored the vitality of the Lebanese, Syrian, and Iraqi people plus that of Israel. 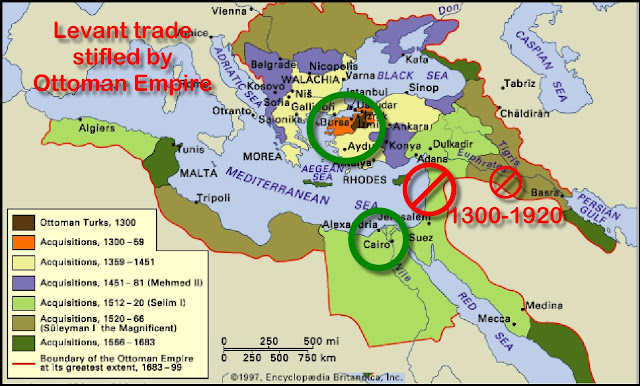 It should not be underrated the impact on culture and economy that reopening trade routes that had been effectively stifled for 500 years. If one were to use Google Earth to look at the snap shots taken and posted on the maps by link to see a fairly modern infrastructure. Competitive to comparable areas in the US outside the suburbs.

What is afoot is the very old commercial and entrepreneurial that was freed by WW 1, vitalized by the French and British, and now searching to find itself after 500 years of economic oppression and 700 years of Turkish domination.  These refugees have had a taste of the good life, and they can't get it at home anymore.

These are not refugees from a destitute and backwater background, they are from one already restored to a state of economic parity, given the BigMac Index. 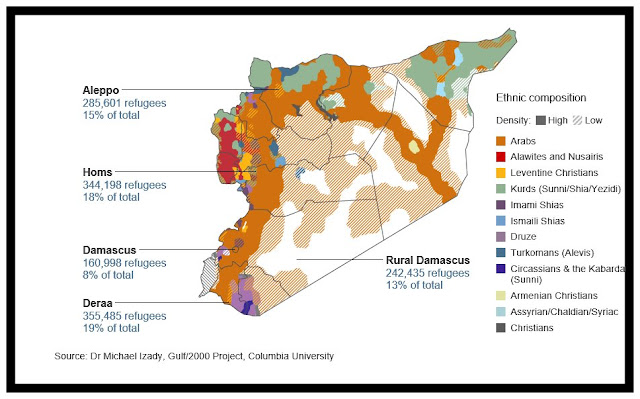 Posted by Gordon at 7:05 PM No comments: