The Ideal Warfigher is one who fights when necessary to advance the cause of his polity (nation, tribe, family) in ways that support the process of survival.  This is fundamentally, the feeding and breeding of same in ways the nurture and protects the future, children who can cope as in sustained survival of children at puberty at a ratio of 2.1 per couple.  Failure to do so means the polity dies or dies out.
1

The operative term is protection as in against those who would destroy the ability of the polity to survive.   This is the psychological aspect of nurturing and protecting against threats, often called villains. The process of protection has defensive and offensive sides one of which is directed at the villains own ability to survive. Hence one man’s hero is another’s villain.
2

Victory in any such conflict occurs when both hero and villain benefit from the arrangements post combat.  And believe it so.  The current imbroglio in the Muddled East is largely due to the inability for the combatants to get to a mutually satisfactory post combat arrangement.
All the firepower, maneuver, and destruction of war that ignores this is a pure waste and a threat to the survival of all combatants to the party.
If you know your enemy and you know yourself you need not fear the results of a hundred battles.

If you know yourself but not the enemy for every victory gained you will also suffer a defeat.

If you know neither the enemy nor yourself you will succumb in every battle.

Sun Tzu’s advice applies to all walks of life.  Especially in divorce court.

Family Values
Knowing enemies, friendlies or those on the fence depends upon the array of psychological roles and attendant sociological rules that make up the substance of cultural or marker awareness.
3


For the professional warmonger, T.E. Lawrence’s 27 Articles is a brilliant case study sadly ignored in the late unpleasantness.  Rules such as these change with each culture.
5.       Remain in touch with your leader as constantly and unobtrusively as you can
6.       Be shy of too close relations with the subordinates of the expedition
7.       Treat the sub-chiefs of your force quite easily and lightly
8.       Your ideal position is when you are present and not noticed
9.       Magnify and develop the growing conception of the Sherifs as the natural aristocracy…

10.   Call your Sherif 'Sidi' in public and in private
11.   The foreigner and Christian is not a popular person in Arabia
12.   Cling tight to your sense of humour. You will need it every day.
13.   Never lay hands on an Arab; you degrade yourself.
14.   While very difficult to drive, the Bedu are easy to lead.
15.    Do not try to do too much with your own hands.
16.   A well-placed gift is often most effective in winning over a suspicious sheikh. Never receive a present without giving a liberal return,
17.   Wear an Arab head cloth when with a tribe. Bedu have a malignant prejudice against the hat,
18.    Complete success, which is when the Arabs forget your strangeness and speak naturally before you, counting you as one of themselves,
19.   If you wear Arab things, wear the best
20.   If you wear Arab things at all, go the whole way.
21.   Religious discussions will be frequent. Say what you like about your own side, and avoid criticism of theirs, unless you know that the point is external.
22.   Do not try to trade on what you know of fighting. The Hejaz confounds ordinary tactics
23.   Allusion is more effective than logical exposition: they dislike concise expression
24.   Do not mix Bedu and Syrians, or trained men and tribesmen
25.   Avoid too free talk about women. It is as difficult a subject as religion, and their standards are so unlike our own
26.   Be as careful of your servants as of yourself
27.   Bury yourself in Arab circles, have no interests and no ideas except the work in hand,

The supreme art of war is to subdue the enemy without fighting. Sun Tzu

In short, winning wars that stay won requires knowing the right motivation for the right people in the right place with the right kind of power.   In Cold War terms, these are key communicators, as those who had links to people we could not talk to.  A two-step process.  And who were open to selected themes and symbols.  Of special note, these key communicators are those who may or may not hate out guts.
5

The Polish Underground in WW2 stopped war production for the Germans for one whole day by issuing a single official looking flyer announcing that all workers could take Hitler’s Birthday, off.  Better than a thousand bomber raid.

All Politics is Local and run by the Construction and Entertainment businesses.
As earth bound creatures, who goes where to do what is implicit in breeding and feeding.  Whether this be a fishing boat, a crib, or in one’s MacMansion in the ‘burbs is the domain of the General Contractor, Building Inspector, Hooker and Pharaoh.   As it is inferred in the Old Testament, Moses was a Building Inspector for the Pharaoh who crossed the General Contractor who got Moses tossed in the mud to make below code bricks (as in without straw).
6


Terrain and trafficability analysis by Moses left the pursuing Pharaoh’s panzers swimming with the fishes.
7


All politics is local, and all local politics is about use and not use of the land.   Getting to local brings the best fruit.  All politicians above the local level succor the support of the construction and entertainment industries.  Therein lies the Achilles’ Heels.
8


Entertainment. Should one doubt the depth of sincerity herein depicted, it should be noted that Sun Yat Sen’s base of power in China were the Triads, Tongs, and other previously pro-Ming Anti-Machu gambling, prostitution and protection rackets.  Chiang Kai Check’s power base in Shanghai was the Green Gang.
Real Estate. The plantation owners of the Virginia Tidelands dominated US politics until they went South.  When Oil replaced Wool and Cotton, who drilled where and when runs deep in the political bedrock.  A necessary precursor to oil is the steel industry.   The present conflicts in the Ukraine are over the Soviet built Don Bass Iron and Coal triangle.  We call this industrial real estate.
Highways and Byways, Rivers and Ridges
Commerce and war move along those routes where the going is easiest which normally includes rivers, high ground, and low ground approaches and restricted where high ground intersects such as passes, and cross corridors.  Generally speaking, towns will grow on the opposite side of a barrier, such as a mountain pass, river and big thickets.  This can be represented by a pair of hands:
9


Whether by commerce, piracy, governance or war, the control of key pieces of ground by one or another goes to three levels of significance: Strategic, Operational, and/or Tactical.  This applies to marketing grapefruit as well as firepower:
10 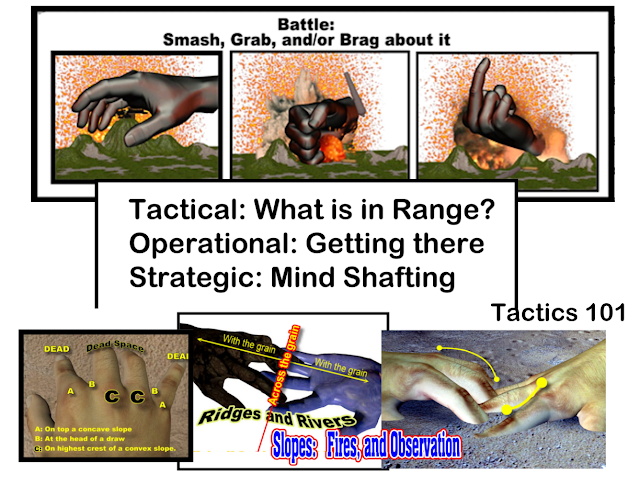 Forking, the Indirect Approach.
Liddell Hart, in reaction to the carnage of WW 2, advocated the Indirect Approach, in which the enemy was placed on the horns of a dilemma, trying to cover more courses of action than could be handled:
From Liddell Hart. "In Strategy the longest way around is often the shortest way there. A direct approach to the object exhausts the attacker and hardens the resistance by compression, where as an indirect approach loosens the defender's hold by upsetting his balance".[1]
From Sun Tzu: "In all fighting, the direct method may be used for joining battle, but indirect methods will be needed in order to secure victory. In battle, there are not more than two methods of attack – the direct and the indirect; yet these two in combination give rise to an endless series of maneuvers. The direct and the indirect lead on to each other in turn. It is like moving in a circle – you never come to an end. Who can exhaust the possibilities of their combination?"[2]
The Force
There are two kinds of warriors: Farmers and Hunters.  No combat ready force passes an inspection, and many inspection ready forces are doomed.  Farmers need directions, hunters need an incentive.
11


The Chain of Command is no stronger than its weakest links.  Nor can it stand alone on the bottom link. Nor can it be separated from the whole of the endeavor. Train from the top down, not the bottom up. The smallest parts only work in the sense of the larger whole; the squad works in the context of battles by four levels up, no less.
12


All living creatures carry battle drill in the genes, often first shown as play.  Hide and Seek is an evasion drill as are hiding in dark or high places. “ Keep Away” is about being the dinner or the diner.  “Ring around the rosey” is about the Black Death.
13


Battles are won or lost in context of the whole sensory environment; sights, sounds, smells, taste and touch.  Of these, smell is the oldest and bypasses all others to the brain.
14


While once not too many centuries ago, technological change was slow, often centuries in the making. Now it is in the blink of an eye.  Knowing the range of shifting options of the Tactical Imperatives is critical in lasting until lunch.  These are extensions of the parts of the body in four modes which ricochet to create a kaleidoscope of options.
15


Despite the best efforts of your best, it is best to get the best deal for the standing.
16


Hic finitur Lectio
Posted by Gordon at 6:36 AM 1 comment: