Posted by Gordon at 8:38 PM No comments:

Failure to let the Generals Command the Commands at War.

The Generals Were Cut Out of the Action

Failure, by Thomas A Ricks an alleged expert on military affairs in his recent book and article in Atlantic magazine places the blame for failure in OIF and OEF squarely on the shoulders of the General (Flag rank) Officers.  By so doing, he demonstrates an abysmal awareness of what the military business and the profession at arms is all about

In short, the generals have for well over a decade been cut out of the chain of command and key staff lines of coordination from the A-Ring to Afghanistan.  The default command and control of US military forces is depicted in Article I Section 8, clauses  10-17 of the specified powers of the Congress (raise, equip, and provide for doctrine).  Article I, Section 10,  Clauses 1 and 3 deny the States from having full time “standing troops” or ships of war in time of peace, allowing them in times of invasion or insurrection.  The Second Amendment guarantees the States right to maintain a militia subject to the doctrine provided pursuant to Congressional Guidance.

The President in Article II, Section 2, clauses 1 and two is Commander in Chief of the armed services of the US including state forces under federal control (National Guard). He has the sole right to appoint with the advice and consent of the Senate, all commissioned “officers of the united states” which includes cabinet members, judges, and all military officers.  Officers make law within their jurisdiction that enforceable in US courts, which includes failure to pick up all cigarette butts if ordered to do so. Officers as such carry the authority of the sovereignty of all the states through Senate confirmation, which the same as for treaties.

During WW2 when the explosive growth of US armed forces demanded a rapid field promotion system and the authority to promote officers to flag rank (General) was delegated to the Theatre Commanders (Bradley. Ike, Mac,  Nimitz and Vandenberg)  Thus if a four star screwed up, the Theatre Commander could relieve him, two stars fell like snow. Today, all appointments to command positions for generals and admirals have to be approved by the Senate and the promotion authority for officers’ rests in the hands of service level promotion boards, and not in the field. During Vietnam, promotions to Captain were delegated to field army level.
Civil Servants and Contractors are not commissioned officers, military, diplomatic, judicial or of any  other kind.  Their future lies in the hands of contracting officials not responsible for battlefield success as are commissioned Officers.

Ricks is clearly not aware that the law that applied in WW2 is a distant memory.  The best a higher commander can do is to relieve for cause which is something not taken lightly.  Murphy’s Law is the First Law of Warfare, so screw ups and disasters go with the territory.  Real civilians can hire, fire or promote based on ankle and elbow test results.  Civil Servants work and get paid during “duty hours” forty per week plus or minus leave time.  All military personnel are on duty 24/7 with specified leaves or passes and still subject to military authority.

There has been a movement most intense for the last twenty years to remove flag and field grade officers from the staff and command of the chain of command, and replace them with civil servants and contractors neither of whom have the carefully designed authority of  a military chain of command and staff.  US officers and non commissioned officers spend ten to twenty percent of their full time active service in residential service training an education over a twenty plus year time in service.

SecDef MacNamara was particularly incensed at the surfeit of uniforms in key command and staff positions and decided that what had worked for almost 200 years needed fixing and the Guard and Reserves were not called, and advanced mathematical models invented to humiliate those whose experience was more earthy.  Field Marshal von Rumsfeld continued the purging of flag and field ranks who had the temerity to use combat proven and tested doctrine, and invented the current system of task organization (Expeditionary Transformational Rotational Modularity).

This tore the combat support, combat service support, and service support organizations out of the walls, floors and ceilings, outlawed the use of the names, and reallocated the functions to favorite contractors and civilian organizations, leaving the experienced flag and field ranks scurrying around to find anything that would allow them to add their professionalism to the fight. Combat commanders in Afghanistan and Iraq reported that there was little or no military sense in the allocation and management of logistics. Where it not for the fact that the Army, Navy, and Air Force Guard and Reserve units were not deployed as trained allowed enough of them to take jobs in the Contractor Mob and make good money.

As the traditional task organization of squad, platoon, company, battalion, brigade (group, regiment) division, corps, field army, army group was flushed toilet wise, and the CS, CSS. SS logistics structure pulled off the chains of command the necessary and well-rehearsed operational competence was shredded.  It is fortunate that these procedures had been ingrained in the services under the Congressionally mandated mobilization alignment in the Capstone Program to real contingency plans, the screw up factor would have made Bladensburg look like a blitzkrieg.
In short, the generals have been yanked out of effective control of line and staff, and what was left of that was put up for bid.

In order to address the sense of duty denied, there are those in the political election business who are trying to subvert those of uniform to participate or appear to participate in posing as players in partisan national politics.

There is a substantive legal difference between service members in general and officers in particular and civil servants doing the same job, and further with contractors, even those former military personnel.  The military can be ordered into considerably more dangerous situations than civilians, and cab be tried for life for refusal or failure.  A civilian is fired for failure to perform, not imprisoned.

The "blame" for failure of operations in OIF/OEF I do place on the contractors per se, but on the Pentagon from stripping the flag and field officers in command of maneuver troops effective command and control of their logistics.  The contractors are bound by the terms of their contracts, which were drawn up by a centralized "procurement" organization.  As such, these logistics elements cannot be prioritized or moved around by the same echelon of command that used be able to for mission requirements.

That which was sliced off the divisional Discom to form the modular support battalions of the modular brigade was done by dividing the assets equally between modular brigades, not driven by priority of fires and maneuvers. The new modular brigade (except Stryker) had two maneuver battalions instead of two to five as needed.  Two maneuver battalion is not flexible enough, and the commanders in the field had to cannibalize units and resort the assets to form additional maneuver teams.  Many field artillery battalions (fires) were re-tasked as infantry as were headquarters companies.  As of now (a decade later) the third battalion is being restored.

The original intent of the modular two-maneuver battalion modular brigade was to restore the number of O-6 (Colonel) command positions formerly in the Pentomic Infantry division of the Fifties which had five O-6 command positions for each of five "Battle Groups" which each had five rifle companies plus two for weapons, support and command.  Since there was no battalion in the mix, there was no O-5 command slot, and the only place a competent infantry Lt Col could get command time was in an Armored Division.  The Armored division did not have the Pentagonal curse. Thus Armored officers and a few lucky armored infantry officers had the requisite command time for promotion to colonel.

The Pentomic Division was replaced with the same organization as the Armored division which went on until Transformation surfaced.  The post-Vietnam task organization of combat divisions for missions removed one of the three divisional brigade command slots to put a National Guard Separate Brigade under divisional control on mobilization in place of one of the divisional brigades.  The cost the Regular Army one each O-6 command slot for each affected division. 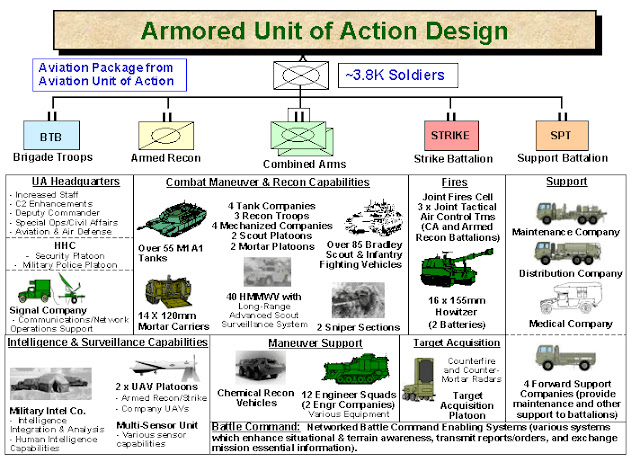 This had to stop. The Capstone Program assigning Guard units a combat mission for existing contingencies was a clear and present danger to promotion opportunity and timing of the O-6 regular officer.  This was an integral part of planning for future missions before 9-11.

The Pentagon set about a deception plan on how they were going to restore the three lost O-6 command slots, and quietly re-tooled the Battle Group to have additional field grade staff and command slots (O-4 and O-5) by slicing up divisional combat support and combat service support assets to support the new modular brigades.  By reallocating the existing maneuver (IN/AR) battalions in pairs created five Modular Brigades restoring the three O6^ command positions.  And it reallocated combat support and combat service support staff and command positions to favor combat support officers.  This was a tactical force design intended for promotions.

The end result of slicing up the DISCOM, COSCOM, TAACOM and other TOE logistics and support organization and replacing them with ad hoc contract aggregates also removed the justification for Flag Rank command positions of those and related TOE organizations.  There were no more Area Support Groups, Transportation Groups, MP brigades, Petroleum Groups et al which made up the support structure.

Not only were the chain of staff and command structures torn asunder, but the experience of how to do that disappears from doctrine.  All of the workings of a Corps Support Command (COSCOM) etc had been undergoing command post exercises of entire corps which included forces from all services and components but those of allied forces as well.

All of the tables of organization, tables for allocation of resources were contained in field manuals that have been used as updated by technology, circumstance that any officer, noncom or service person could slip into any organization, and know what to do.  Now it's company policy and contract provisions.
In ten years, the experience base will start to erode to the point that years will be needed to restore.

The stated intent of Transformation was for light, fast and agile forces, what they got was a force with maneuver limited to an extent not seen in the field since the Spanish American War. Transformation was intended to make life simple for the Pentagon to move around, but which required an extraordinary force of troops to make work.

For that reason, I stand in awe of the professional competence of our troops that made an impossible task seem simple.  The forces I served with in Germany, Japan and Vietnam would have been stopped cold with the kind of Mickey Mouse Transformation served up by Pentagon.

This is what General Dempsey knows he has to fix, but the quagmire in the Pentagon is full of mines and obstacles placed to preserve and protect lifetime employment of the Permanent Party.

Posted by Gordon at 8:37 PM No comments: