JOINT BASE PEARL HARBOR-HICKAM, Hawaii — The newly promoted head of U.S. Pacific Command on Wednesday described China’s claims to a vast swathe of islands in the South China Sea as “preposterous.” 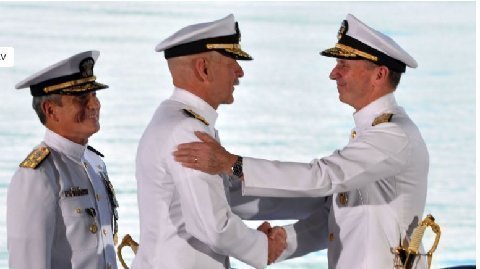 That the PACOM Commander uses the word, preposterous, it preposterous to those not in the voting chain of the US and its possessions. To the Chinese, Japanese, Philippines. Borneo, Brunei,Malaysia  Indonesia and Vietnam it is a return to those not so hot days when China did rule the South China Seas.

The high point of Chinese dominion over the South China Sea, and the Indian Ocean was under Zheng He, the eunuch admiral of the Ming Dynasty whose fleets of ships which dwarfed the best Europe had at the time. This was the last time China expanded in this direction largely as a result of power politics within the central government which preferred to keep those exercising power on a shorter leash. Hence Zheng He's voyages, ships, ship yards, records and reports were destroyed.

This policy of inner sublime navel concentrations carried on under the Manchu Dynasty by the 19th Century, Japanese "pirates (before 1626), and the Round Eyed Barbarians intruded into the pockets of port authorities to sell opium in exchange for porcelain.

This is the Chinese view of the absolute pits of the worst of holes in which the Celestial Empire had been cast. Since the foreign extraterritorial Concessions to foreigners (including the US) were revoked by the Pro-Japanese faction of the Republic of China (Nanjing Faction) by Wang Ching Wei, now considered the traitor of traitors, except for his decree abolishing said concessions. Wang was the number 2 person in the KMT until Chiang set assassins after him, unsuccessfully, after which he sought to cut a deal with the Japanese and Germans.  His demi-legitimacy remains that the current regime fully accepts his decision on foreign concessions.
This was our view of China in 1940

This is a straight line extension of the Chinese Imperial self images, not so off the wall rogue admiral or a power shuffled. This has to be dealt with Beijing in a manner which saves China's face. Slaps will not do.
The Japanese were dismayed by the division of China between the other imperial powers of whom Japan had altered their personality and nation to fit the (western) imperial model.  Since their eyes were not in alignment with Western Eyes, Japan sent the US a 14 part message explaining things

We dismissed the Japanese demand to be treated equally in the division of China,and dismissed the power of the Imperial Fleet. Likewise we over estimated the superiority of the Round Eye over the other eyeballing through a gun sight. First we need to get a sense of what constitutes the significance of the psychological roles, sociological rule, and technical tools the Chinese are using in their quest to live as a society from day to day and generation to generation.
Before we open fire.
Gordon S FowkeS, KCTJ
LTC USA RET
Posted by Gordon at 2:04 PM